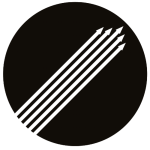 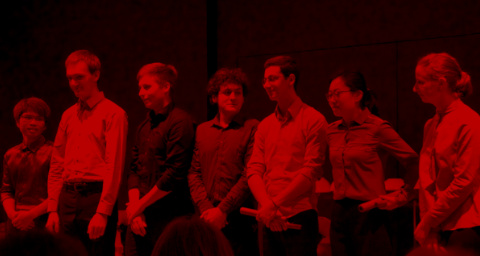 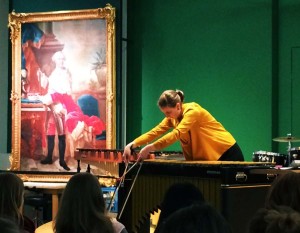 The concert takes place in Mannheim, Germany at the impressive venue Zeughaus (built in the 1770ies) in the Florian-Waldeck-Saal. In front of a considerable number of concertgoers Anna Zeltzer opens the concert with Mourning Dove Sonett by Christopher Dean, a piece for vibraphone requiring different types of mallets and the glissando effect. This playing technique is produced by scraping a hard mallet over a plate of the vibraphone shortly after hitting it. The use of two contrabass bows is also required. The notes sound mellow and appear smoothly. When being gently touched with one finger the bowed plate sounds very high because of the resulting overtones. The musician has to hold one bow plus one mallet per hand. She handles all the technical challenges very well and meets all the conditions of the composition. Handling the bows implicates sometimes big preparatory movements to apply the bow to the right plate at the right time plus considering the longer attack time compared to struck notes . These are the true challenges of the piece. Anna Zeltzer is proceeding too cautious in my opinion. Therefore some phrases are suffering. Perhaps I´m influenced by Edgar Guggeis’ interpretation of this composition: His big movements looked like those of a fencer and were very quick. Therefore he was prepared very well every time for every bowed note resulting in very good time and clear understandable phrases. On the other hand are Anna Zeltzer’s movements functional and are not distracting from the music.

Remarkable and fascinating performance by Anna Zeltzer at the beginning of the concert with this over 10 minutes long piece. 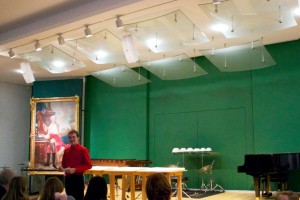 Confident and entertaining Lukas Heckmann leads through the concert providing some background information for every composition.

Professor Dennis Kuhn leaves the stage to his students except for a short announcement at the beginning of the concert. Quitly he stays on the sideline pulling the strings.

The composition by François Sarhan is a piece for voice and body. It is performed by the Costa Rican Luis Andrés Chavarría Báez. The young musician had the luck of being able to work on his performance with the composer who visited the Musikhochschule Mannheim earlier this month.
Lukas Heckmann mentions that the audience will witness an authorized Version of the piece and that it is about sound, speech, movements and
gestures – actually music and drama. The premise: A musician sits in front of a incomprehensible machine he wants to come to know.

The musician speaks rhythmically, sings single notes, hits on his thighs, chest and cheeks and endures breaks of different lengths. The audience is witnessing the musician’s conduct. Is he gaining any insights on the functionality of the machine? Is he deliberately interacting or just soliloquizing trying to play with it? Is he staying unaware the whole time? Does the machine conducting him? Is the whole thing about serious learning or playing for fun – or both? What kind of interface does the machine have – a touchscreen or buttons and levers? Is the musician the interface for the machine? Does the machine play the man? Is the audience sitting in the machine?
The question comes up: “How do you get into this machine, now?”. The player appears like someone who wants to organize the machine’s processes but simultaneously wants to learn and wants to adapt himself to it thus being torn between his different intentions.

Body percussion with spoken words at once, tempo changes, stepping on the floor, pauses, drumming on both cheeks – at the end the protagonist looks at his hands, reproduces the gestures for a last time, looks again at his hands and then slumps, still sitting there on his chair. He appears drained and discouraged. Is it his capitulation to the machine?

Luis Chavarria throws himself into this enigmatic piece and gives it a compelling shape from beginning to end. He creates a unique form of expression which for me illustrates how man burns himself out meeting a standard set by a machine literally making a step back in manhood while so emphatically communicating with the machine. For me this was one highlight of the evening – still continuing to have an effect.

Next, Fangge Lue (german spelling, unfortunately I don´t know how to translate her name to English) plays a transcription of Johann Sebastian Bach’s Chaconne from the Partita in d minor on the marimba. Technically sophisticated, sound-wise never hard she plays flowing phrases which are weightlessly differentiated. Technically brilliant with coolness during the quiet parts she creates a legato that is sounding muss less like a mallet instrument than usual. Elaborated interpretation. Wow!

Before the break Anna Zeltzer and Luis Chavarria play the setup piece CaDance by Andy Pape.
Lukas Heckmann informs the audience about the details of the composition for two percussionists. It builds oneself up on systematically organized groups of eight notes. One player has to play longer groups than the other. In total the one player reaches the end of his phrase after 50 eight notes, the other after 49 eight notes. After 50 phrases both players “meet” again. 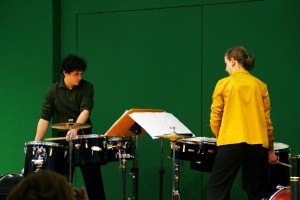 The basic sound elemen is an eight note pulse played by both musicians. It starts as rim clicks, moves on to the body of the drums and lasts nearly throughout the whole composition. Accents on the body of the drums, on the drum heads then on the bass drums followed by impulsive sixteenth note objections which increase the musical tension especially when following each other like echoes or when interlocking. Further increasing elements are the one-eight-note-opened hihat, rim shots and hits on the crash cymbal and the ride cymbal’s bell.

The minimalist composition increases further to more rhythmic interlocking clusters. I find the unpredictability and self-similarity of the composition interesting: I know the sounds but the combination is always new.

Slightly over intellectual for my taste the piece grooves immensely – if you know the code.

Played in the same dynamic range almost the whole time with constant beats on the body of the drum (a semi-interessing and after some time quite annoying sound to be honest) the fascination of the composition is to find out when the two players will finally meet again. 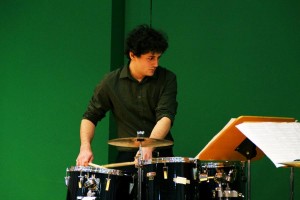 That happens in an unspectacular ending consisting of (finally quiet) eight notes played on the musician’s thighs. For me the mathematic appeal is minimal. Very interesting sound-wise and exciting to follow are the emerging tom melodies between both players.

I would have been able to listen much better to the music not having had the information on the internal structure of the composition. Instead my mind was pondering over the question if the composer’s intent was a mathematic-constructivistical formula or a compositoric-musical idea. 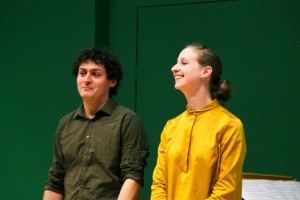 Because of my mono-task (=thinking) I could not listen… Then I nearly lost my attention and had to keep it up willingly. Without my thoughts the piece would have had a totally different impact. Both musicians played concentrated and confident.
Impressive performance when keeping in mind that one eight note always means much. 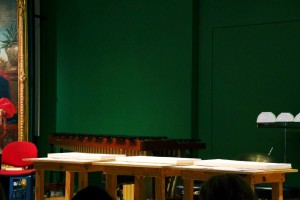 After the break Luis Chavarria, Lukas Heckmann and Dominik Minsch play Musique de table by Thierry De Mey.
Informations by Lukas Heckmann: With this piece the Belgian movie and dance artist Thierry De Mey creates a ballet for the hands thus combining his fields of actions.

Created for a movie, the composition demands from the three musicians acoustic and optical perfection. 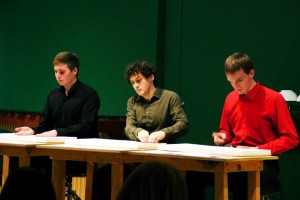 The musicians create the sounds on the table surfaces of three tables by using only their hands: Scrubbing, wiping, scratching, tapping, clapping and a sound played like the “abanico” on the (flamenco) guitar.

Accellerating the swiping motions results in accents. Rhythms are “passed on” among the musicians who also create round forms with their hands in the air. They change from perfect to partially interaction to individual actions. You can only listen to the composition but it´s definitely worth seeing it.

Each musician played on a styrofoam™ board plastered with grainy wallpaper. Therefore all sounds of this choreography for the hands were audible without using microphones and speakers which is a common method used with this piece. 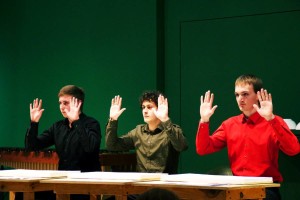 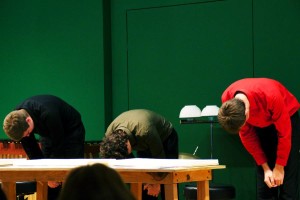 I find the rhythmic precision of the three musicians fascinating. With perfect timing they accomplish all movements. Obviously thy worked hard on their choreography. All movements of the hands in the air are perfectly coordinated. As a result a rhythmic and organic air sculpture emerges. Fast rhythmic echoes between the players are precise and form the impression of a single rhythm. That can only succeed when three internally active players of whom every one is in control of his part want to create the whole. I liked it very much.

6/8 – The Legend of the Golden Snail – Roberto Oetomo 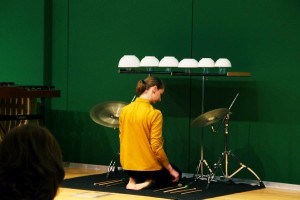 For me the second highlight of the concert was The legend of the Golden Snail by Roberto Oetomo for porcelain bowls and cymbals.

According to Lukas Heckmann the composer Roberto Oetomo, a former student at the Musikhochschule Mannheim, wrote the piece in Australia in the year 2010 and that he forms the Askill Percussion Duo together with Anna Zeltzer (also from Australia) the performer of his composition in this concert. Lukas Heckmann reads the myth on which the composition is based upon. Every segment of the composition illustrates an episode of the story.

For the first time this evening Anna Zeltzer opens up the really quiet sphere of perception with Indonesian-like melodies which ring from far away. She plays the bowls with soft mallets. A second level of sound is created by a wooden rod.

One cymbal is hit medium soft the second scratched by a small headed mallet.

For the first time the cymbal sound is floating like a wave. Then it’s gone. I remember How The Stars Were Made by Peter Sculthorpe. Both pieces are based on a myth. A musical language I enjoy.

The next episode begins with harder sounding and louder melodies. Gradual change to medium hard mallets prepares the ending of this part.

Then a soft tremolo played with fingers an the bowls. Loud cymbals at the end.

A reminiscence to the beginning sounds of the composition like from a forgotten dream.

A light dance consisting of a steady cymbal pulse and a melody on the bowls: This is the last episode.

I like the deep impact of this Indonesioan-Australian “short story”. It´s the combination of a simple composition which works with well chosen sounds and an excellent live performer like Anna Zeltzer this evening. As I said: Highlight! 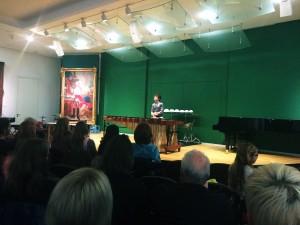 T-Hsien Lai uses the whole dynamic range of the instrument. He is on top of things and impresses me with his versatile and musical playing style. One time he´s playing very loud but without being harsh to the instrument or sounding hard. Impressive. In addition he never looses the guiding thread while playing this detailed and varied composition thus creating a whole piece of music. His excellent timbre shaped the whole concert. 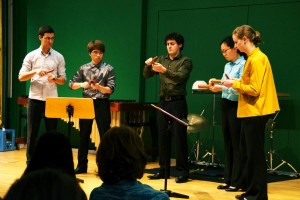 This true classic of modern percussion literature strikes me every time with it’s multi-dimensional possibilities of perception. Different time signatures are possible to hear. The composition makes you flow in different contextual time frames. 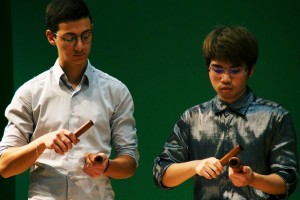 The Mannheim students play skillful and with rhythmic perfection. They capture the minimalistic and hypnotic nature of this piece. 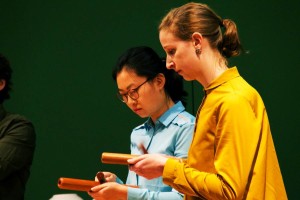 A confident conclusion of this successful concert by the students from Turkey, Taiwan, Costa Rica, China, Australia and Germany. 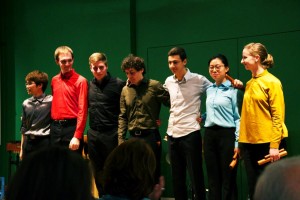 During the final applause one could see the joy in the faces of the young musicians having mastered such a demanding concert so brilliantly. 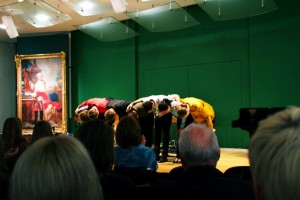 The next concert takes place on December 8, 2015 in Neustadt an der Weinstrasse at another beautiful venue, the Saalbau. 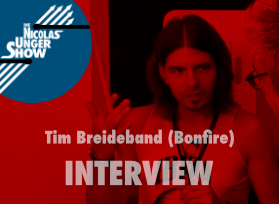 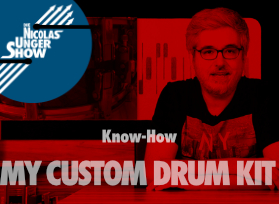 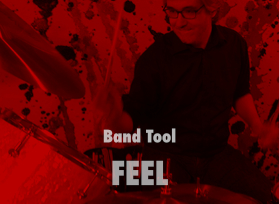